We are His sheep

Back at the start of the book of Ezekiel, Ezekiel was called to be a watchman over the people of God. Now in Ezekiel 33, he is reminded of that calling. He’s been through a lot in that time, but the calling still stands. It’s as if he’s seen the sword coming against the land and blown a trumpet to warn the people – he is not then responsible for what happens to those that ignore that warning. If the watchman had seen the danger approaching and not warned the people, then their blood would have been on his hands.

so hear the word I speak and give them warning from me.  Ezekiel 33:7

Let’s be clear. God does not take any pleasure in the suffering of the wicked. He yearns for them to turn away from their wrongdoing and truly live. No one can rest on how well they have behaved in the past. And no one can be judged on what they have done in the past. It is what the state of their heart is today that counts. The people are still saying this isn’t fair.

But I will judge each of you according to your own ways.  Ezekiel 33:20

In the twelfth year of Ezekiel’s exile in Babylon, a man escapes Jerusalem and comes to Ezekiel to tell him that the city has fallen. The people there are confused. They can’t believe what is happening to them. As descendants of Abraham, they believe they have a divine right to the land. But God asks them to examine the ways in which they have been unfaithful to Him and then say they have a right to possess the land.

Then they will know that I am the Lord, when I have made the land a desolate waste because of all the detestable things they have done.  Ezekiel 33:29

People are coming to sit before Ezekiel to listen to his words, but they’re not putting them into practice. What’s the use in that? That’s a challenge right there to those of us that sit in church and listen to sermons week in week out.

Their mouths speak of love, but their hearts are greedy for unjust gain.  Ezekiel 33:31

And actions speak louder than any words.

God then turns to an analogy of sheep and shepherds. The shepherds are meant to care for the sheep, but instead they’re putting all their energy into caring for themselves.

You have not strengthened the weak or healed the sick or bound up the injured. You have not brought back the strays or searched for the lost. You have ruled them harshly and brutally.  Ezekiel 34:4

And so the sheep have been scattered and devoured by wild animals. And the shepherds will be held accountable. 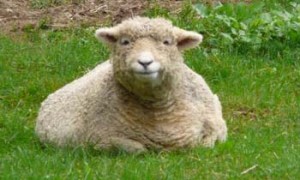 Now God will be the shepherd of His flock. He will search for His sheep and bring back the strays. He will look after them. He will rescue them and gather them together. He will protect them and provide for them. The sheep will trust the shepherd to look after them so much that they can lie down and rest – not something that sheep get to do very often. Lying down is a big deal for a sheep. They have to feel completely secure and protected and provided for to be able to relax enough to do that. It’s a great image.

Those that trample on the land and muddy the clear water will be punished. Those that do not take care of what they have been given by God and exploit all the good things they have will be held accountable. And those who are strong and push the weak out of the way, they will be judged.

They will know that I am the Lord, when I break the bars of their yoke and rescue them from the hands of those who enslaved them.  Ezekiel 34:27

And we are those sheep.

You are my sheep, the sheep of my pasture, and I am your God, declares the Sovereign Lord.  Ezekiel 34:31

And so we can lie down and rest in complete trust that God will protect and provide.

The Lord’s my shepherd, I’ll not want;
He makes me lie in pastures green.
He leads me by the still, still waters,
His goodness restores my soul.

He guides my ways in righteousness,
And He anoints my head with oil,
And my cup, it overflows with joy,
I feast on His pure delights.

And though I walk the darkest path,
I will not fear the evil one,
For You are with me, and Your rod and staff
Are the comfort I need to know.