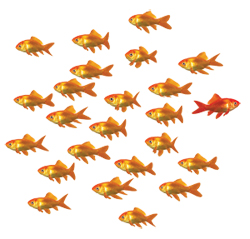 When Andy and I were at university together, one of the books that had the greatest impact on our lives was ‘Letters for Auntie Flo’ by Graham Young. It was all about living life in a counter cultural, radical way. Read it aloud with a Northern accent. Anti Flow. Swimming against the tide. In fact, that was the cover image – one lone fish swimming in the opposite direction to all the others.  We burned with a vision to live that way. Andy was the revolutionary; I was more conservative. But together, we looked to a future of living out our Christian faith in practical, radical ways. Looking back, yes, we were young and idealistic and no, we haven’t been all that we had aspired to be. But many times, it has felt as if we have been swimming against the tide. People have noticed. People have thought we are crazy. People have treated us as different, weird, occasionally inspiring.

Here’s a list of some of the weird stuff:-

Yes, so not all that radical and earth-shattering, I know, but enough to make us seem different and draw comment and feel like freaks at times. Anyone who tries to be different is going to feel isolated at times. And sometimes other people don’t like it. It questions their lifestyle and causes them to be defensive. And so they mock or construct an argument or question or make excuses. The way you live makes them feel uncomfortable. And that makes things uncomfortable all round.

The prophets in the Bible had an uncomfortable time of it. They were rejected, scorned, physically persecuted at times. They were shouting aloud what no one wanted to hear. Just as anyone throughout history who has tried to speak out against the status quo has suffered. Those who spoke out about slavery and racism, women’s rights, climate change, the poor – all sorts of issues that challenge the way people live and think. And they don’t like it. They try to silence these voices in any way possible.

Because your sins are so many
and your hostility so great,
the prophet is considered a fool,
the inspired person a maniac.  Hosea 9:7

When I read that verse, it prompted me to think back over our lives. Not that I am setting myself up as a prophet or an inspired person. I’m really not. But I have been considered a fool and a maniac for some of the decisions and choices I’ve made. People have said I’m not a comfortable person to be around. Too challenging. My Dad was always advising me to keep my head below the parapet. I was never any good at listening to that advice. And so yes, I have been shot at (and my Dad would sigh and say he told me so).

Yes, maybe sometimes I am just a freak. I’m pretty sure I’ve got it wrong, spectacularly wrong on occasions. But maybe occasionally I am inspired by God to walk the path I’m walking. This verse stood out to me, because in it God is saying He is calling us to be weird and feel like aliens and be called freaks, because His way is not the way of the world. He’s calling us to be different, not for the sake of being different, but because He doesn’t want us to be conformed to the ways of this world but rather to be transformed by the renewing of our minds (Romans 12:2).

So go ahead. Call me weird. I’m OK with that.