Separate development? No, time to celebrate integration and diversity.

I find the starting point of the Exodus story very interesting. The descendants of Abraham, Isaac and Jacob have been living in Egypt for close on 400 years at the point that Exodus begins. And yet after 400 years they live separately from the Egyptians. There has been no integration in any noticeable away. The communities are separate enough that the Egyptians can persecute the Hebrews easily and completely. And this seems like an odd state of affairs. 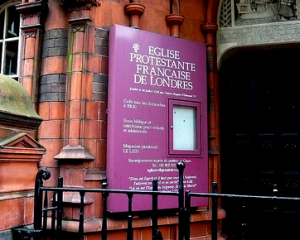 One of the few traces left of the Hugenots in London

In 1670 there were 40-50,000 French protestant Hugenots who came to the UK. They lived mainly in the East End of London and the Essex towns to the east of London. Today you can find traces of their culture and a few surnames with a Hugenot derivation, but if you wanted to send everyone with bit of Hugenot in them “home”, it is estimated you would have to send 2 million Londoners across the Channel!

That is the power and the benefit of integration. Everyone benefits from an enriching of their culture with something from elsewhere. Within my family we have seen it both ways. I have nephews, nieces and cousins living from California through to Berlin and a few places in between. I have brother in law whose family fled Uganda during the brutal rule of Idi Amin. Diversity and integration makes us better. Makes us stronger. And it gives us an inclusive world view.

So before you send me your Britain First facebook posts and UKIP “we’re not rascist but…” propaganda, think of things you would be giving up if we made Britain “pure” again. No more early morning kebabs when the chippy is closed. No more vodka, tequila or Sangria. No pizza in front of the TV. No more popping out for Chinese or treating ourselves to Tapas. And of course it’s not just food. If you work for Nissan, Komatsu or any of the other hundreds of companies who have created HQs in the North East, be prepared to look for a new job.

Of course, none of that explains why the Hebrews and the Egyptians had stayed so separate, but I will let Helen tackle that another day.

Footnote: If you really think Britain First is OK, check out this blog on 12 reasons why it’s not.